DUNNING — Dozens of Dunning parents echoed their long-held desire on Monday for a high school to call their own, despite increasing signals that a $75 million new school set to be built in the Read-Dunning area will open as a freshman campus for Taft High School in Norwood Park.

At an open forum called by 38th ward Ald. Nicholas Sposato to discuss the future school’s identity, Sposato and Chicago Public Schools demographics director Jim Dispensa said district leaders will take another year to decide whether to open the building in fall 2019 as an independent four-year high school. The decision could come as late as January 2019, they added.

Still, Dispensa trotted out multiple arguments for a new Taft campus, saying the “impetus” for the new school was to relieve overcrowding at Taft, and an independent high school may not fulfill that goal.

“We think that if there’s an opportunity to reach out to some of the families inside the Taft attendance boundary and convince them that Taft isn’t the right school for them, that they’re better off going to a new start high school — that’s a hard argument to make,” Dispensa said. “The board would be put in the position of King Solomon and have to decide how the [Taft] boundary gets split up.”

Dispensa added that the three Dunning elementary schools that would feed into the new campus — Dever, Canty and Bridge — are “nowhere close” to combining for enough students to sustain a four-year high school on their own.

Sposato echoed Dispensa’s caution over the new school, saying “There’d be nothing for your kid there” by way of resources during the first several years, as the school would be populated one grade at a time. But the alderman added that his “mind is not made up” over how the school should be used.

Construction is due to begin on the school early next year, now that the physical plan has been approved by the Chicago Plan Commission and City Council. During the district’s presentation to the commission last month, Dispensa said district leaders are “leaning very strongly” toward opening the school as a Taft freshman campus.

The plans outline two wings sprouting from a two-story atrium, adjoining a pair of outdoor courtyards. One wing would include a cafeteria and gymnasium, with the other filled with classrooms. The school would joined by a turf football field and track facing Irving Park Road, officials said. To its northwest, across Bittersweet Place, another plot of land would be set aside for potential development by the Chicago Park District.

The plan also leaves space for two multi-ton piles of salt and mulch, maintained by the city’s Department of Streets and Sanitation, to remain on the grounds. Sposato has vowed to see the piles moved.

The alderman has held multiple public meetings to since the project was officially announced in January, inviting parents to weigh in on which students they’d like the school to serve. Each time, a vocal constituency of parents and other residents of Dunning have kept up a steady drum beat for an independent high school. 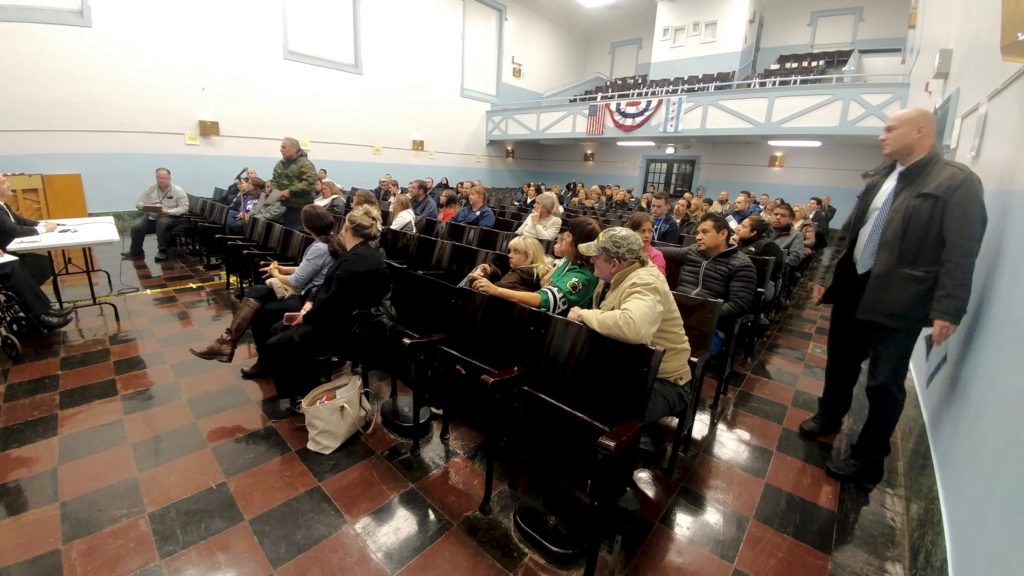 About 60 people attended the meeting at Bridge Elementary School on Monday.

On Tuesday, multiple parents at Bridge Elementary School — which sits two blocks from the site of the future high school — questioned why the district would open a satellite school more than three miles from its main hub.

Tensions sometimes flared during the meeting, with Sposato threatening to call the police on one speaker he said wasn’t a parent of students at Canty, Dever or Bridge. And several speakers, including Steinmetz College Prep High School Local School Council chair Vanessa Valentin, said any new school would draw even more students away from the already under-enrolled Belmont Cragin school.

But with city workers already surveying the Read-Dunning grounds for construction, most speakers kept up their call for the Dunning land to exclusively serve Dunning students.

“We have a school a mile away from us, we want them to go there,” O’Donnell added. “We want a four-year school.”

The room erupted in applause.